While the rest of the world is counting down to Easter during the last week of Lent, the party is already kicking off in Spain. The celebration of Semana Santa (or, the Holy Week) is a relic of Spain’s deep Catholic past. Symbolism-packed processions with intriguing costumes and golden shrines fill the streets, as well as thousands of eager spectators. For the non-believers amongst us, these cavalcades might seem a bit odd – or even frightening – at first. That’s why we are happy to ‘baptise’ you with this Semana Santa crash course and let you in on all the illustrious secrets of the Catholics’ holy week.

What do we celebrate during Semana Santa?

Unlike Christmas and Easter – which celebrate the birth and resurrection of Jesus – Semana Santa is a bit of a mournful gathering. It commemorates the suffering of the Messiah during the last days of his life and his subsequent passing at the cross. Depending on when and where you attend a Semana Santa parade, you will see different symbols and scenes from this turbulent Bible passage. From a mourning virgin Mary to the bearing of the cross and the crucifixion itself. Whatever story they focus on, it usually isn’t a happy story.

What will I see in these processions?

The protagonists of the parade are the masked members of so-called ‘cofradias’ (or, brotherhoods). Don’t let their white robes and pointy hoods fool you, these people have nothing to do with the more sinister groups in the US who wear similar costumes. Instead, their aim is to take care of the fellow Christians in their neighbourhoods and far beyond. The reason for their disguise is that, in the Middle Ages, they wanted to walk in the cavalcade without having to face bloody repercussions of their non-religious rulers afterwards. Like Jesus, they usually walk barefoot; sometimes even with shackles or chains attached to them. Furthermore, the parade comes with high numbers of sacred candles, lush shrines and giant statues (or, ‘pasos’); and – of course – crosses galore! 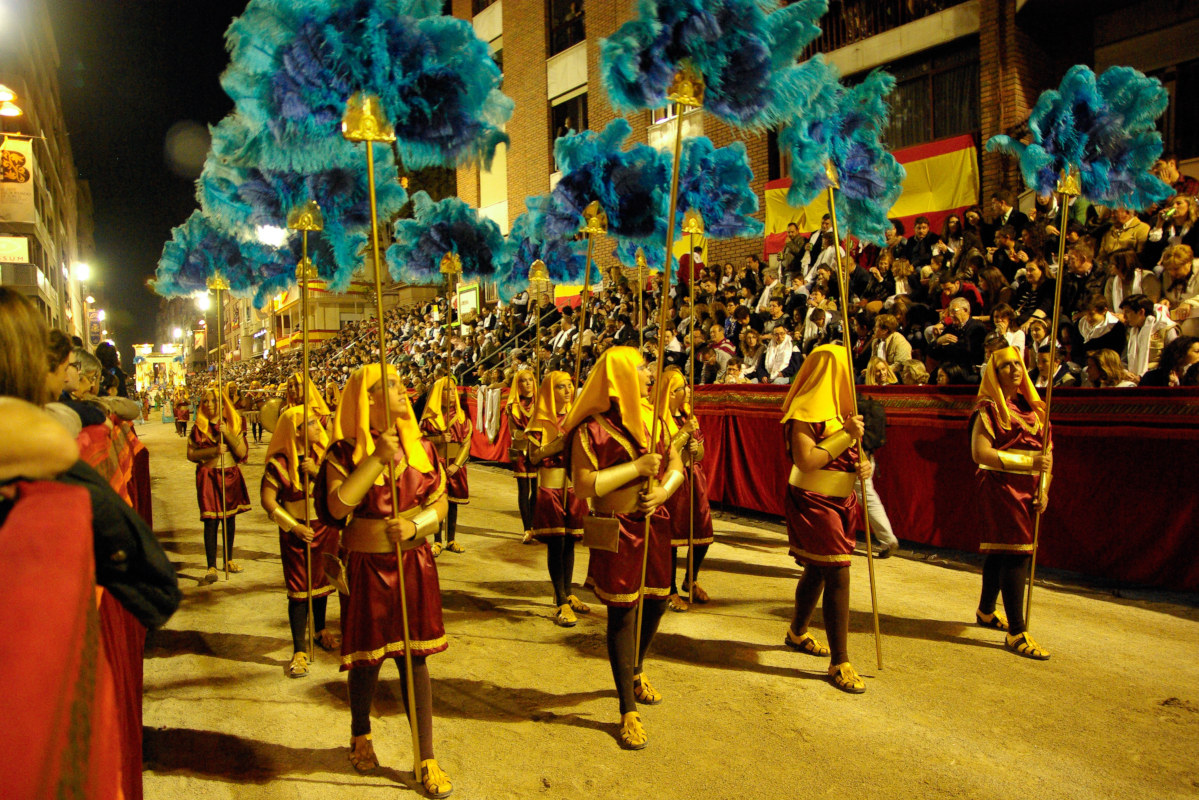 Where is the place to be?

In almost all regions of the Spanish mainland, as well as at the Balearic and Canary Islands, you can attend a Semana Santa procession. Yet, most famous and popular are the ones in Andalusia. Sevilla is the biggest and most popular one of all, but also in Granada, Málaga, Córdoba and Almeria, you can attend a particularly nice one. In the central region of Castille and Léon, you can find many of them, as well. Yet, these are more solemn and mournful than the Andalusian ones. The small city of Lorca (in Murcia) is known for its interesting Roman-themed Semana Santa cavalcade.

And what happens on Easter?

On Sunday, all that mourning is put in the past and it is time to party. After heading to church in the morning, entire families gather at the ‘abuela’ for a nice, heavy meal – supposedly the first one after 40 days of fastening. On the menu: ‘bueñelos’ (small, shapeless donuts covered in sugar), ‘torrijas’ (honey-drenched French toast), ‘pestiños’ (deep-fried fritters with anise, orange and sugar) and ‘monas de Pascua’ (sweet bread rings with whole eggs baked into them). But before inducing that sugar rush, they enjoy a nice garlic soup or seafood dish.

This year’s Semana Santa starts at 5 April and ends on 12 April, Easter Sunday. On which day(s) they celebrate, depends from town to town. So, check this online or at the tourist office.