In the heart of the Loire Valley, a region of France teeming with Renaissance chateaux, Chenonceau and its arched gallery have sat across the Cher river since the 16th century. An architectural masterpiece, Chenonceau demarcates itself by combining French opulence and elements of Italian style. Re-imagined by Catherine de Médicis, Chenonceau became a prime example of aesthetics and pleasant living. But beyond the physical edifice, Chenonceau also stands for a rich cultural heritage ranging from gastronomy to wine-making and floral art.

As one might expect of a French chateau, Chenonceau has a long and eventful history. While the domain itself dates back to the 12th century, the edifice was conceived between 1514 and 1522. Two decades later, in 1547, King Henry II gifted it to Diane de Poitiers, his official mistress. Passionate about the chateau, Diane commissioned an arched bridge straddling the river, as well as flower gardens arranged in eye-catching shapes on the opposite bank. After Henry II’s death, his actual wife, Catherine de Médicis, reclaimed Chenonceau from Diane de Poitiers, and proceeded to commission yet more ambitious modifications and expansions. The queen from Tuscany set out to bring an Italian flair to Chenonceau, overseeing, among other things, the development of the chateau’s stunning Grande Galerie, which was built along the existing bridge. As queen regent, Catherine had ample room to throw lavish parties, and Chenonceau became famous for its night-time celebrations. In 1560, on the occasion of her son’s coronation, it hosted France’s first fireworks displays. Chenonceau also made the chateau an important point in wine history by implanting the Italian Chenin grape in the Chenonceau vineyard.

Close to five centuries later, Chenonceau still holds the values of taste, elegance and celebration. Culinary prowess, for instance, is embedded within the chateau’s DNA. Again, Catherine de Médicis proved an inspiration for the Chenonceau style: her love of sweet treats prompted her French chefs to learn how to cook France’s first sorbets, macaroons and frangipane sweets. Under her, refined royal feasts became a marker of political strength: now, the Orangerie restaurant carries on this culinary legacy by offering a rich menu highlighting local, seasonal products as well as varied vegetarian options. And to accompany the food, the chateau holds a yearly wine-tasting event: on the third Saturday of July, the wine-making association of the Touraine Chenonceaux appellation gather at the domain for free samplings of their red and white offerings. Lucky visitors can even enjoy these wines in the Grande Galerie, occasionally open at night. 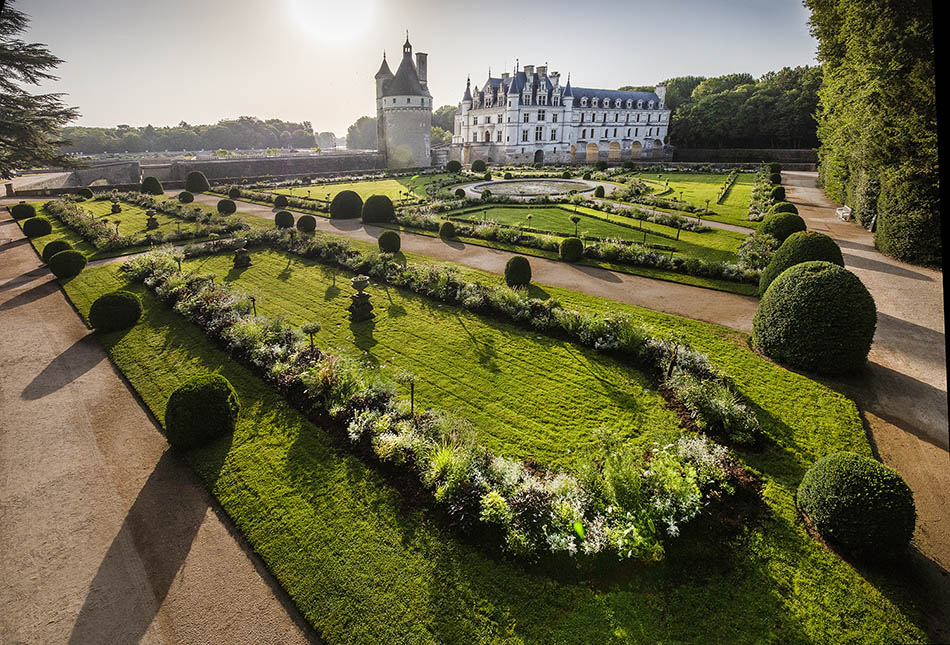 Beyond extraordinary architecture and good cheer, Chenonceau is noteworthy for its horticulture. For over 20 years, the chateau has hosted the ‘Atelier Floral’ (flower workshop), a unique occurrence in Europe. Every day, two florists work from the one-hectare flower garden, to conceive and realise the stunning floral bouquets for which Chenonceau is known. Headed by Jean-François Boucher, who holds the title of ‘Meilleur Ouvrier de France’, the Atelier and its resulting creations are partly responsible for Chenonceau’s unofficial status as ‘France’s most elegant chateau’.

The 80-hectare park that surrounds Chenonceau, nestled deep inland, is bound to appeal to nature lovers, and is home to many free-roaming animals and birds. To that end, visitors are encouraged to walk around the woods as well as in the gardens (pets on a leash are even allowed to join in).

A variety of other activities

In the summertime, Chenonceau offers a variety of other activities: visitors may, for instance, rent a barge and go paddling on the Cher river, or take an evening stroll around the gardens. In the spirit of spreading Catherine de Médicis’ enthusiasm for good eating and exciting entertainment, the Orangerie restaurant, the historic wine cellar and the gardens can all be booked for private events, including light shows, music and evening-time entrance into the grounds.

In 2020, the Chateau opened the Cabinet de Chenonceau, a curiosity cabinet created by the influential philosopher Jean-Jacques Rousseau in the 18th century. Later this year, for Christmas time, Chenonceau will unveil its ‘Paradis Royal’.